2 based on the top anime page. Please note that 'Not yet aired' and 'R18+' titles are excluded.

Tropes for the characters of Kemono Friends. ALL SPOILERS ARE UNMARKED. 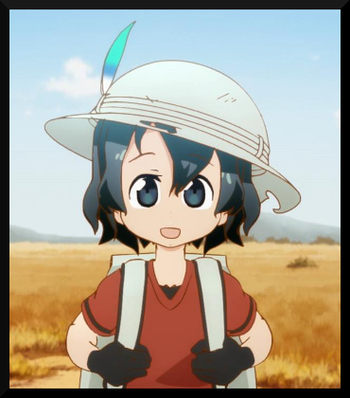 The heroine of the story. She suddenly woke up one day in Japari Park not knowing where she or who she was, and set off on an adventure through the park to learn what kind of Friend she was. Although she can't fly, climb or swim as well as the other Friends, she is incredibly resourceful and quick-thinking. She's effectively a successor to the original franchise's Mirai character, being literally born with (and from) Mirai's hat. 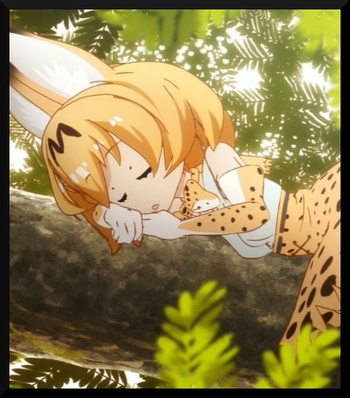 Kaban's adventuring companion. She's energetic and known as a troublemaker amongst the Friends of the Savannah, but she's also incredibly kindhearted. After befriending Kaban, she decides to join her on her Quest for Identity.

The new main character for season 2, Kyururu is a quiet, softspoken boy that Serval and Caracal encountered while playing. He's trying to look for his home, using his old sketchbook as help.

A new character introduced in season 2, she's a feline who lives in the same habitat as Serval. 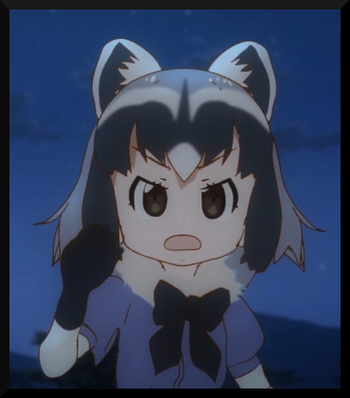 One of the Friends of Another Story. She is searching for a thief who stole something apparently precious, and is following the footsteps of Serval and Kaban to do so. She's often a little bit too quick to jump to conclusions. 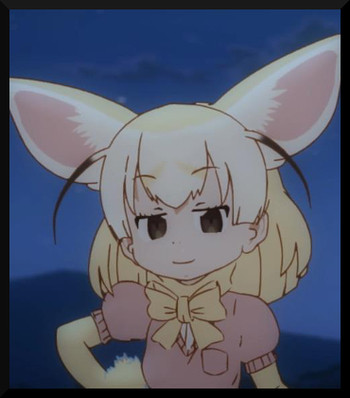 One of the Friends of Another Story. She acts as the companion to Raccoon and tries to keep her more airheaded companion in check. 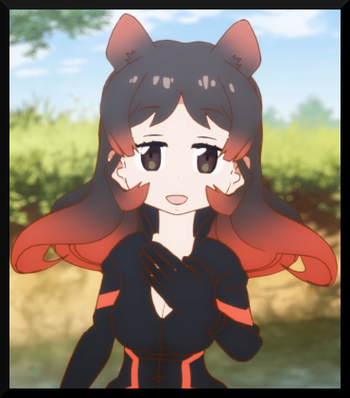 A Friend who lives at the watering hole. She's a bit of a worrywart. 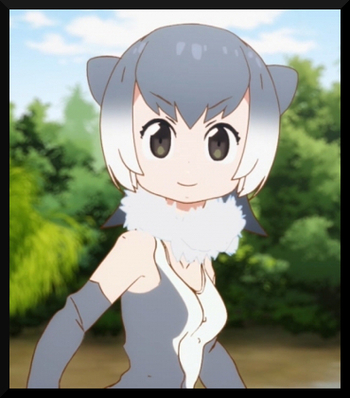 A Friend who plays in the jungle river. She helps to rebuild the Japari Bus. 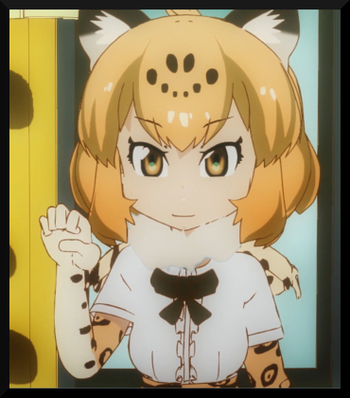 A Friend who has great swimming ability and provides a ferry service to other Friends. 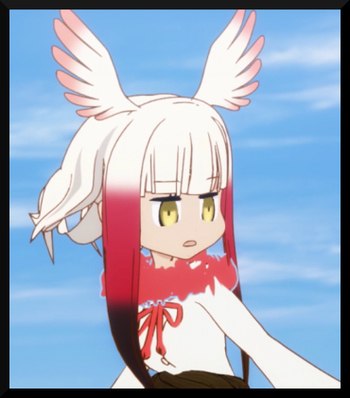 A red-colored bird Friend who lives near the mountains and flies Kaban up to the cafe. She loves to sing, but she isn't very good at it. 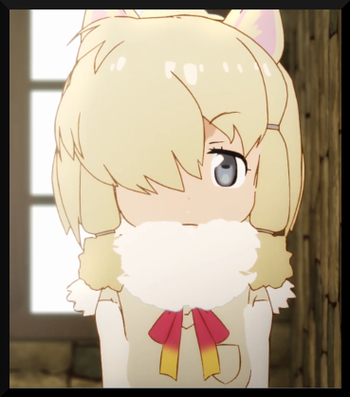 A red-headed bird Friend that appeared late in the episode. 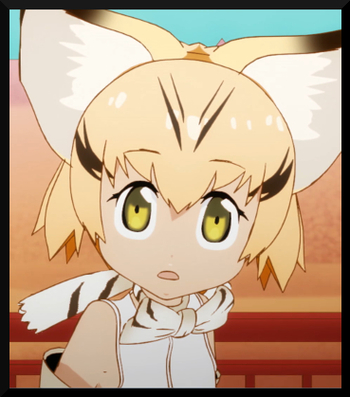 A Sand Cat Friend who lives in the desert area. She has a short attention span. 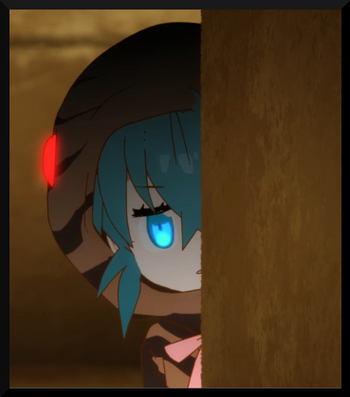 "Because It calms me!"

A cryptid snake Friend who is researching the human ruins in the desert area. She's rather secretive. 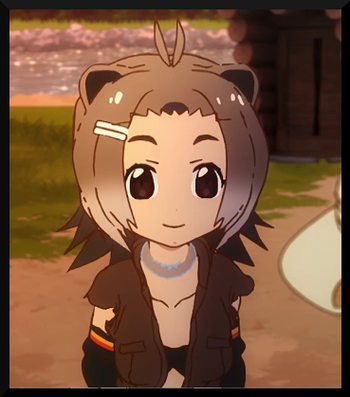 A beaver Friend who is trying to build a home. She tends to get so caught up in planning that she never actually builds anything. 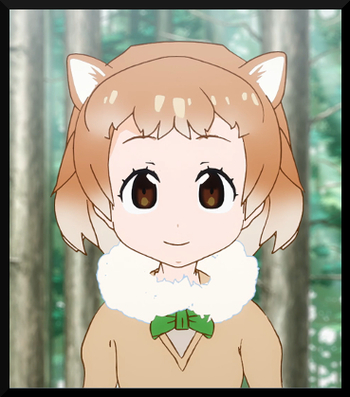 A prairie dog Friend who is trying to build a home. She's a fast worker, but her lack of planning tends to get her into trouble.

The leader of her army, and Moose's rival. Although she acts as a serious leader to her soldiers, in private she just wants to relax and doesn't want anyone to get hurt.

A member of Lion's army.

A member of Lion's army.

A member of Lion's Army. Seen guarding the castle's flank.

The leader of her army, and Lion's rival. Although powerful in her own right, her general plan for attack has led to her army suffering 51 defeats in a row.

A member of Moose's army.

A member of Moose's army. Wears a heavy suit of armor that makes her look like a knight.

A member of Moose's army. Her specialty is stealth.

A member of Moose's army. She looks intimidating, but that's only due to her piercing stare.

A professor who resides in the Japari Library. She, along with her assistant, study humans. In the original game her given name is Konoha.

The professor's assistant who resides in the Japari Library. In the original game, her given name is Mimi.

A Meganekko cat Friend who's a huge fan of PPP. She can even imitate their voices perfectly.

A member of the idol group PPP. She organizes them and acts as their unofficial leader behind the scenes. Her stage name is Princess.

A member of the idol group PPP. She acts as the energetic tomboy of the group. Her stage name is Rocker.

A member of the idol group PPP. She acts as The Heart of the group. Her stage name is Gen.

A member of the idol group PPP. She's something of an airhead. Her stage name is Hululu.

A member of the idol group PPP. On stage, she plays the role of the bold leader of the group. Her stage name is Emperor.

A red fox Friend who is seen in the crowd at the PPP concert.

A fox Friend who helps maintain the hot springs. She's rather lazy.

A fox Friend who helps maintain the hot springs. She's the more hardworking of the two foxes.

A Friend that is seen in the hot springs. In the game, she was the owner of it.

A bird Friend that works in the Lodge.

An aspiring detective Friend who attempts to solve a mystery that is occurring in the Lodge, with mixed results.

A Friend making a manga who gets ideas by telling scary stories to other Friends and drawing their reactions.

A monkey friend who is a member of a group of Cellien Hunters.

A bear friend who is a member of a group of Cellien Hunters. Unlike most of the other Friends, she doesn't fear fire.

A wild dog Friend who is a member of a group of Cellien Hunters.

The only non-Friend animal appeared in the anime.

A dolphin Friend who lives in the ocean. Kaban and Serval meet her as they travel across the ocean.

Season 2, Episode 3: Creatures of the Sea

Season 2, Episode 5: The Power of Humans

Arma and Sen's client, who has been staying at an abandoned house waiting for humans to return.

A fox Friend running an abandoned seaside hotel, which is now half-covered by water.

A snake Friend who runs the souvenir shop of the hotel.

A Friend who is in charge of the hotel's maintenance.

A horse Friend who lives in an abandoned horse racing stadium along with two fellow horse Friends. She is the first to befriend Kaban and Serval, and serves as their guide for the stadium.

One of the three horse Friends who live in an abandoned horse racing stadium.

One of the three horse Friends who live in an abandoned horse racing stadium.

The main antagonists of the story.

A new antagonist introduced in Season 2. A feral, more vicious version of a Friend due to a failed result of an animal being exposed to Sandstar.

Navigator of the now-defunct, mobile game version of Kemono Friends. In the anime, she is a former park guide who was forced to evacuate due to the Cellien threat. 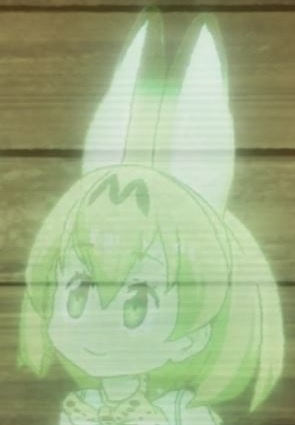 An absolutely giant Cellien that resides near the harbor and is almost completely invulnerable to attacks.

2 based on the top anime page. Please note that 'Not yet aired' and 'R18+' titles are excluded.